With a nod toward a famous California style, Chris Hereford renovates a home with special coastal touches. 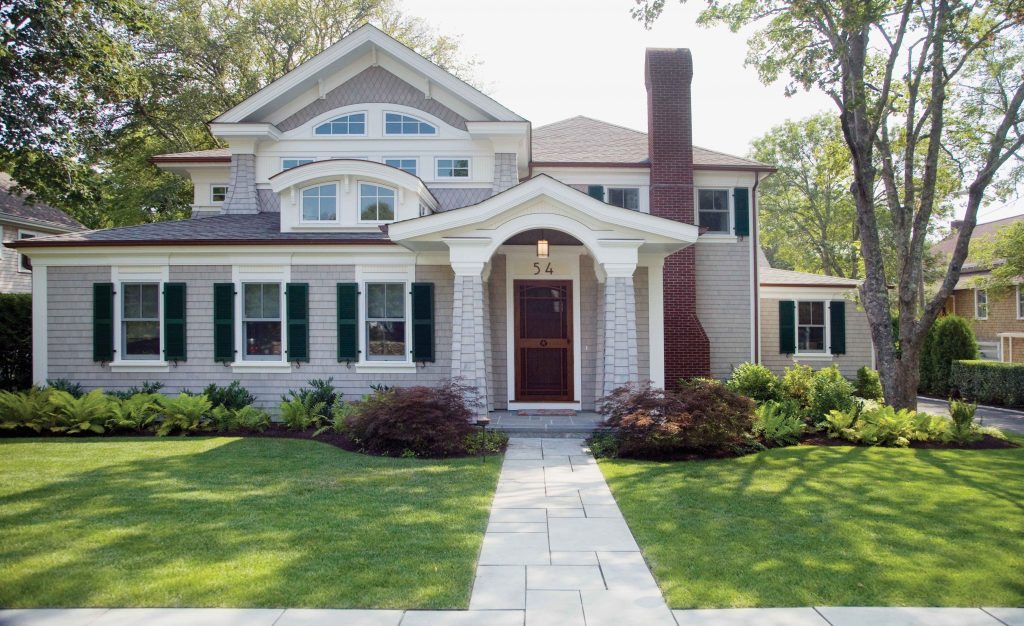 “It’s not everyday you come across a client like this,” says Chris Hereford of HMD Architects in Harwich. “She really wanted to go the extra distance to create a home that was special.” The original house, which sits just off of Chatham’s Main Street, was a mishmash of styles—a little Greek Revival, a little Federal. “We did a total renovation of the house,” says Hereford. The dark, closed-off spaces did not work for the family. “There are often three generations under one roof here during the summer months,” says Hereford. Hereford, who had worked with the client on other house projects in the past, designed new spaces for the family—two additions—as well as adding much needed curb appeal and natural light to the home.

The arched interior entryways pair perfectly with the arches featured on the exterior house, such as the front porch and windows. Photo by Eric Roth

“We gave the exterior a new face,” says Hereford, who chose a more contemporary design for the old house. He took elements of the Craftsman style first developed by early 20th-century California architects Greene and Greene, the design duo most noted for Pasadena’s 1908 Gamble House. The house achieves a horizontal quality intermixed with Japanese flourishes, such as the flared front porch roof. To maximize natural light entering the home, Hereford incorporated a gable and a barrel roof dormer to the front facade. The barrel dormer acts as the clerestory windows for the living room, bringing much needed light into the space. A band of three windows also bring in additional sunlight. Not forgetting the other facades, Hereford popped in clerestory windows and additional barrel vaulted dormers to the side and back of the house, again, to bring in as much natural light as possible.

Although the exterior gives a nod to the California Craftsman style, the cladding is all Cape. Gray shingles cover the exterior. To add interest, Hereford finished shingled corners and tapered Craftsman-style columns with a double basket weave design. He also employed bands of scalloped and diamond shingles. A subtle wave motif—first realized in the arched dormered windows—was introduced throughout the design to reflect the rhythm of Chatham Harbor and the open ocean beyond.

The combination of oranges, blues, and tans put a playful spin on this kids room, complete with bunk beds perfect for a sleepover. Photo by Eric Roth

Upon entering the home, one is struck by the level of detail that Hereford carried from the exterior. Tapered pilaster moldings frame the entry to the living room. Crown moldings and baseboards are built-up to create balance and harmony within the spaces. “All the moldings are custom-made and create continuity between the exterior and interior trim detailing,” says Hereford. Other trim touches Hereford incorporated into the home are the dining room’s beamed ceiling, built-in shelves, and cove moldings that conceal rope lighting.

The sun porch’s vaulted ceilings steal the spotlight and add a sense of character to this Cape home. Photo by Eric Roth

Handsome, sophisticated features include a living room finished in beadboard and an airy sun porch with a vaulted ceiling given definition by radius mahogany tie beams. The flooring was replaced with maple planks with attractive mahogany borders. The addition of a quiet serene master suite and a comfortable bunkroom offers added sleeping space for a large family. The bunkroom also has a coffered ceiling and substantial cove moldings that add interest to the space and hide mechanical grills. A built-in window seat offers storage for toys and clothing.

Heather McGrath, owner of Simpler Pleasures in Chatham and Hereford’s sister, and Vanessa Card were the interior designers for the home. “We have worked with this client for 10 years on various projects. She has a wonderful eye and her daughter who is studying architecture in Boston also got involved with choosing colors and papers,” says McGrath.

In a well maintained outdoor landscape, sea grass and rosa rugosa are on full display. Photo by Eric Roth

The most important factor for the interior—besides being relaxed and comfortable—was to create a backdrop for the extensive collection of artwork amassed over the years by the client. “The artwork really drove the design,” says McGrath. The homeowner has an eclectic mix in several different mediums and genres. “The client chose vibrant paint colors to speak to the artwork in the various rooms—she was not scared of color,” says McGrath. The rich tones chosen, such as midnight blue for the family room, orange for the bunkroom, and Tiffany blue in the dining room, offset the artwork.

The light blue tones and abundance of natural light give this bathroom an airy quality. Photo by Eric Roth

“It’s really important to find out what a client’s needs and wants are before you start a project,” says McGrath. “This client put so much of their personality into the home.” The fabrics chosen are light, airy, and have an organic quality. McGrath—a master seamstress—did most of the upholstery and drapery sewing herself. “Whenever possible we specified low-VOC paints and cotton or wool fabrics—we also buy from mills that have good environmental practices,” says McGrath.

Subtle hints of the home’s special location are found throughout the house—a starfish embellishes the custom-mahogany screen door, a Nantucket basket rests on an antique table, seashell and sea grass motifs are found in accent pillows. “The client wanted to give the home a Cape feel without that look becoming overwhelming,” says McGrath.

The landscape around the home also has a natural feel with native plantings that are low maintenance. Sea grass and rosa rugosa wave in the breeze. A garage/guesthouse was also renovated on the property. An outdoor shower and garage windows continue the wave theme. “We wanted to tie the buildings together into one cohesive design,” says Hereford. Hereford and McGrath transformed an outdated house with impeccable taste, innovative detailing, and informed design for an active family.
For more information, go to HMD Architects, www.hmdarchitects.net

Nancy E. Berry is a freelance writer who lives in Yarmouthport.